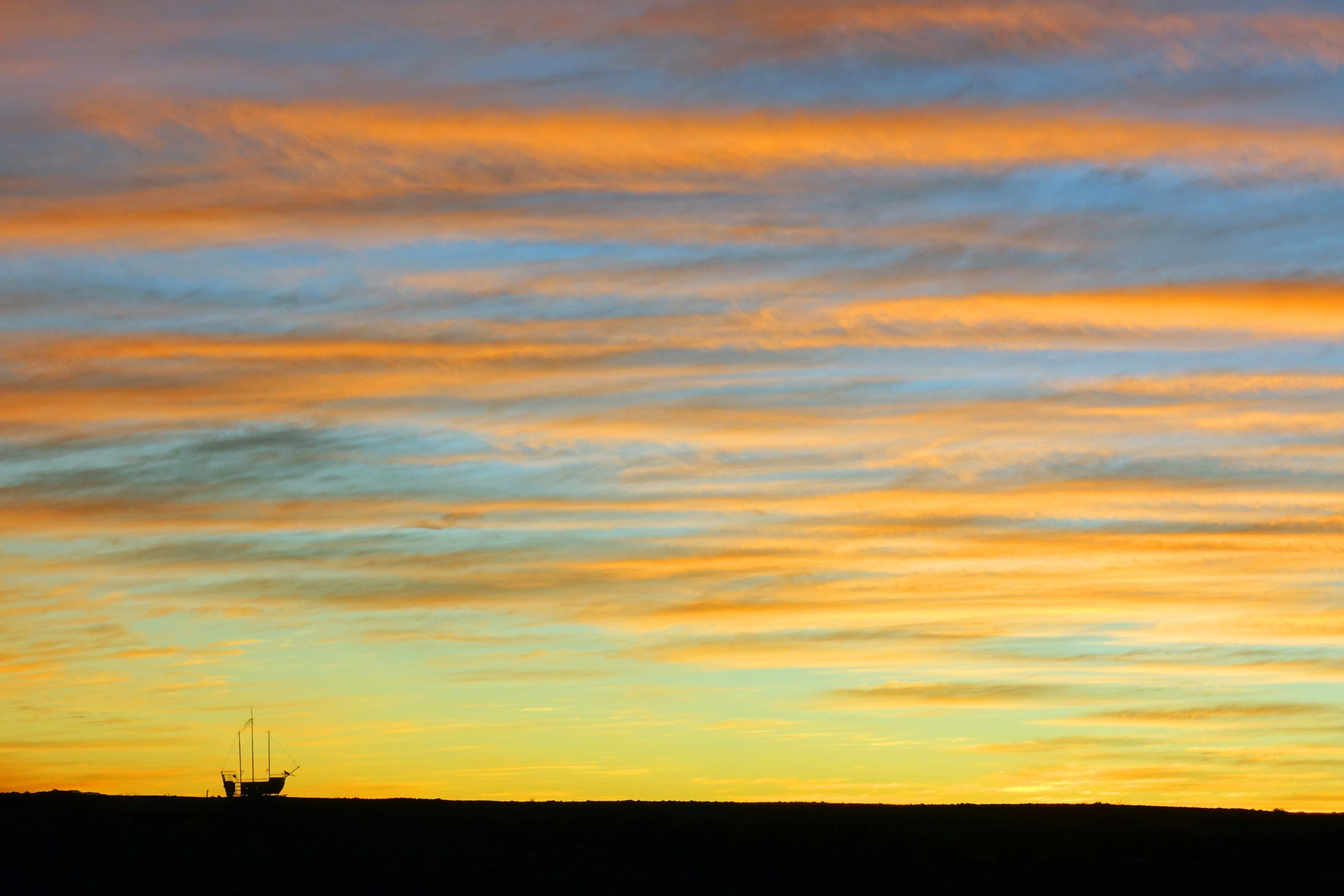 We were looking at the weather for the past 2 weeks, thinking of how (more importantly, when) to plan an overnight trip away. The government also officially announced that leisure travel is now allowed and that was apparent when Ruxi was phoning around looking for accommodation for the Friday night for our Friday/Saturday ride. Turns out it was also a long weekend on the Monday which none of us were aware of at the time. Luckily Tankwa Tented Camp had some space for us, and so it was foretold, I went on to plan a route with as many passes as I could muster.

For me, my trips start when I begin packing. I started bouncing when I began putting on my new soft panniers and toolbag together, getting my bike prepped on the Thursday. By Friday morning, we left slightly after 7am and headed up the West Coast to Atlantis and Mamre into the green hills before Darling as the sun rose on a crispy Friday morning. After Darling, the ambient temperature dropped to 1 degree! And I’m sure somebody told me this when I adopted Pumbaa, but I must have forgot, the bike was giving me a cold temperature warning on my dashboard! We had to stop in Moorreesburg for coffee, and the owner of Kosblik let us in before they opened and very kindly offered us some coffee to warm our bones.

After we could feel our fingers again, we turned up Kapteinskloof Pass to meet the Bergvallei towards Witelskloof Pass where we passed blossoming flower farms on our way into the kloof. After the pass, a bakkie pulled out in front of us, and I thought that I could overtake him to avoid riding in his dust, but it was a farm workers bakkie, and this wasn’t his first time on this road because he was hauling, so I backed off a little, and before long, the dust cleared and we got to enjoy the shady and surprisingly narrow kloof of Kransvleikloof Pass which comes out on the N7 just South of Clanwilliam. 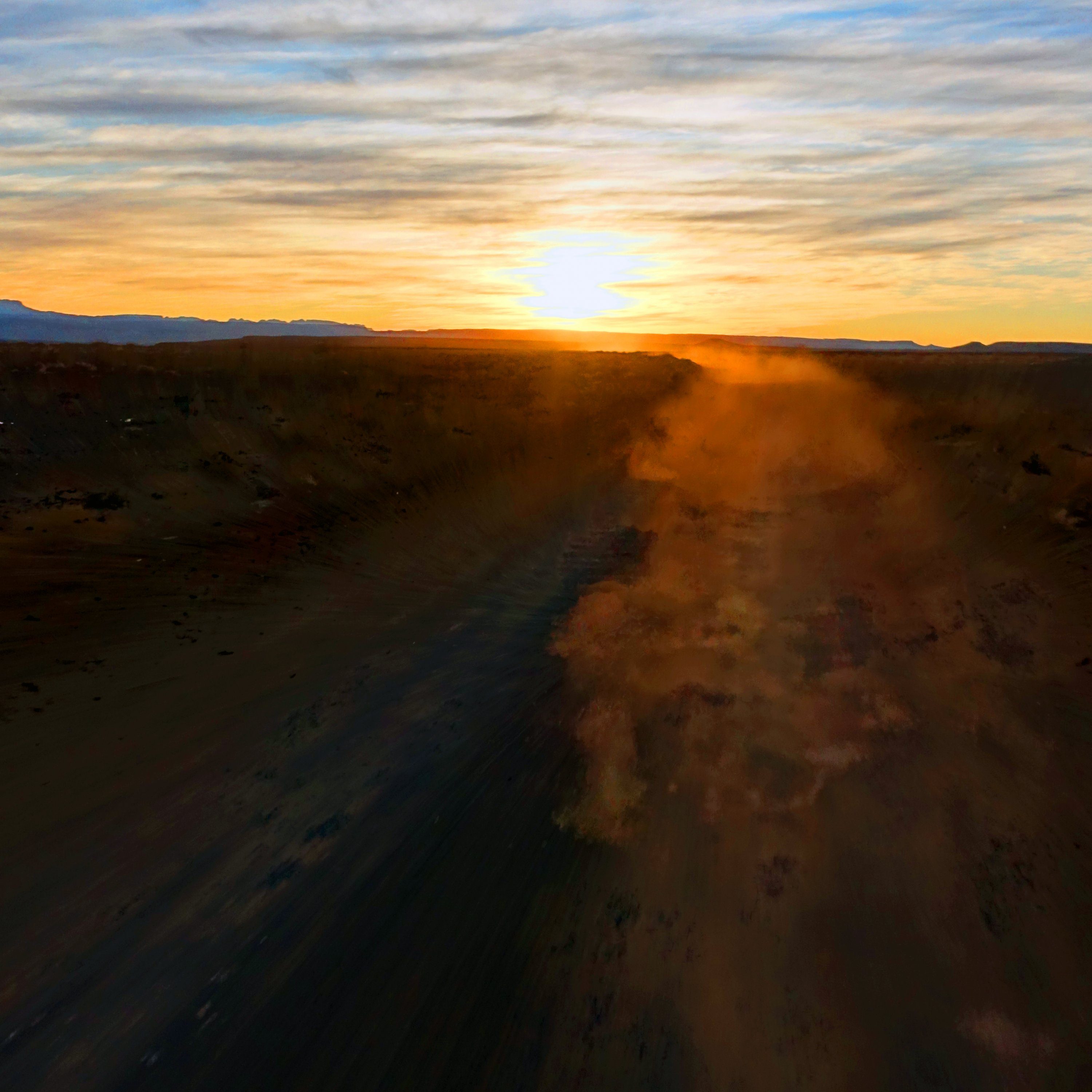 We stopped for fuel in Clanwilliam at 11:00, and because I was nervous about the distance to Ceres, I carried 4L of extra fuel in plastic bottles. We made our way over the fairly windy Pakhuis Pass into the Rocklands. As I was going on my merry way, I overshot the turn off according to the GPS route, and attempted to make a U-turn, unfortunately I forgot how to do those, and swiftly parked the bike in the middle of the road with no fuss or resistance. We quickly checked on each other, and moved the bike after finding nothing and no one damaged in the slightest. Anyway, that U-turn turned out to be for nothing because I routed us through Bushmans kloof which is a private wellness center apparently. No bother, there’s a right turn which goes round the property just 4km further down the road.

Coming down Hoek se Berg, we were treated to visas of wild flowers down in the Biedouw Valley where we stopped for roadside lunch at 12:00 just before rising up the Kouberg Pass to Wupperthal. Going through the town, you can see clear evidence of fire damage in the area. Everything happens slow in this area, and one can’t blame them, the journey to the outside world (and resources) is a long expedition away. The river crossing, as with all the river crossings on our trip on this occasion, was very minor and a short distance later, we took a right turn up the super steep, but concreted Eselbank Pass to quickly gain height and perspective from the western flank of the valley. I rarely looked over the edge, as I was engaged with the present activity of staying upright on the narrow tracks heading skywards. Thankfully we only passed one 4×4, and luckily it was on the plateau section at the summit of the pass.

Before the village of Eselbank, on a right-hand hairpin, there is a well-marked road leading to the Eselbank waterfall where we stopped to explore for a short time. We still had a long way to go for the day, and couldn’t dilly dally, but next time I would like to approach the waterfall from the southern view point which, according to the maps, is an extra 4km round trip. Going through the village, I am not fooled into thinking this is an easy place to live, but the locals seem very relaxed judging by their porch sitting, afternoon chilling, traveler waving old folks of the town. After the challenge of the pass and the rest at the waterfall, I had to remind myself to pay attention as the sandy road was no billiard board. Once we got to Matjiesrivier, things started looking familiar again as I get a glimpse of the Grootrivierhoogte Pass, snaking its way over the saddle. We were making up some time coming down from Blinkberg Pass, and took a left turn just before the local school, now again, my GPS routing skills have come into question as we pass through a private property sign again. Nevertheless, we push on. How could I have made a mistake!? It’s obviously some land owner that has just decided to close off a right of way servitude road. Turns out I was wrong, and just 8.5km further is an alternative (and possibly more obvious direction to Katbakkies). Anyway, while on our land invasion, we trundled through herds of sheep and punishing tracks of loose sand. By this time, we were veterans of falling, you could tell this by the sound effects on my GoPro from my grunts and Ruxi’s giggles. We’d even stopped checking on each other and just got on with reestablishing Pumbaa’s dignity. After speaking to some farm workers and finding out that there is a locked gate on the end of the road, we did a long run around looking for the manager who was very friendly and helpful, but did tell me that the new owners do like to keep the gates locked and prefer not to have any through traffic (I have informed T4A about this, so buy their latest maps for current information, they are exceptionally helpful, it’s just my backward ways that I need to learn how to read it first).

It was 16:00, I was fatigued at this point and we had just got to Katbakkies pass, try to appreciate to views from here though, it is a sight to behold. Coming down Peerboomskloof was truly spectacular, and we were very fortunate to oversee the Karoo in this late afternoon light with plumes of dust, tracking overland travelers going off in various directions over 100’s of square kilometers before us as we would soon be part of that landscape. We made a short stop at the Tankwa Padstal before racing the sun up the R355 to reach the Tented Camp just before 18:00, and sunset.

It was both Ruxi’s and my first time at the tented camp and we were greeted by various ornate and monstrous sculptures as we approached the site, with the landscape lit up in a red tinge from the setting sun and kicked up dust made for an eerie entrance to our rest stop. We pitched the tent, took care of some TLC for Pumbaa and headed for some chow and refreshments. In the morning, we took a walk around the site to see some of the sculptures in the morning glow. We were sharing the sunrise with one other early bird at the tall ship, and we got chatting and it turns out this man was from Vredendal Farm in Montagu and he was kind enough to deliver a box of pure raspberry Vitamin Bombs for an extra boost on our journey ahead, thank you sir! There is a lot to say about group riding versus solo riding, but from what we are finding is that strangers felt that we were more approachable and came over to chat while we were getting ready. Depending on the situation, that can be a pro or a con, it’s really just up to you.

We left just before 10am for a rustig cruise through the Tankwa Karoo past the International Airport and into a Martian landscape. It felt like the Empty Quarter’s rocky counterpart, with plains of nothingness and no signs of life. You could well believe you’re the only inhabitants on Earth while on this road, but before losing it completely I found a junction and turned onto the hekkiespad going down south where we were fortunate to encounter some vegetation, a Gemsbok a couple of meters from the road, and some Springbok further on. After eventually circling around in a clockwise fashion, we got back onto the R355 before the Bo-Swaarmoed pass. I pulled over to admire the chilly Matroosberg and a bite or two of some padkos at 11:00. Further along down the hill, while passing through the orchards, we spotted the old slave bell and stopped for a closer look at the 250-year-old+ construction and across the road were a variety of antique farming tools on display.

We were rudely brought back to reality when we arrived in Ceres, as is with all farming towns on a weekend, with immense crowds of people going about their shopping and meeting with friends. I had to carefully navigate between pedestrians to get to the fuel station (453km after Clanwilliam). We swept through Mitchell’s Pass and turned onto the R43 to Bains Kloof (Although we stopped in Ceres for milkshakes at an adequate establishment, we have noted to go to the Hillbilly Farm and Padstal just after this R43 turnoff next time as it looks far more interesting). After getting through Wellington, we noticed that the incoming weather patterns must have brought on this hazing mist covering seemingly the entire Cape Town area, we set home through the farm roads via Kliphuewel and Malanshoogte Pass while continuously being buffeted by the wind to come out on the northern end of Contermanskloof, my favourite cooldown “lap” before returning home at 16:00.

Having hit the sack and hearing the rains coming down, it was good to know that this weekend’s trip was a big success. We both had memorable moments, taken some fantastic photos, gained some lessons and come out safe on the other side and in time for the MotoGP on Sunday too. My trusty steed will be getting her well-earned attention tomorrow and I might even treat her to some new treads soon as well.

Words by Wes, Pics by Ruxi 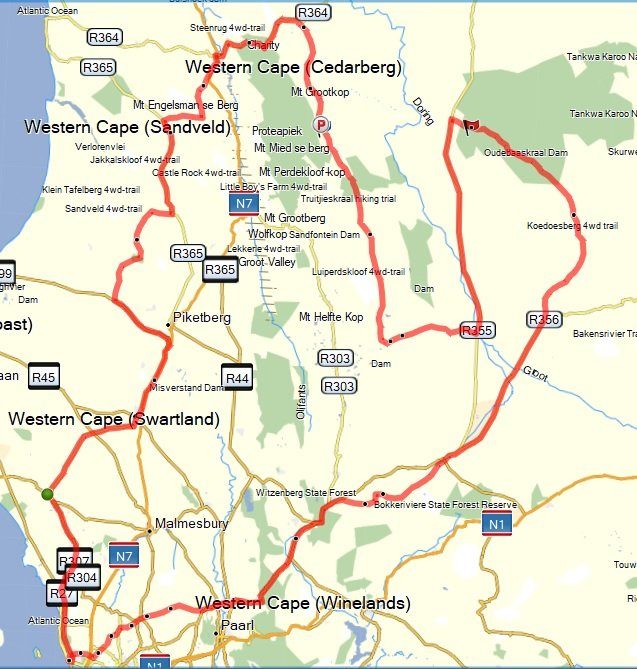