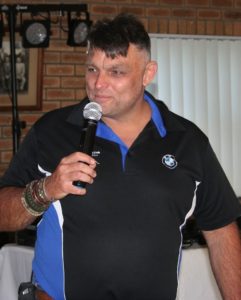 5. NEW BIKES: Linda van Niekerk; Cecil
6. TRIP REPORTS: Jacqui explained the award adjudication for trip reports and submission get a club coffee cup.
Nominees for the quarterly award include Charles, Carl, Wesley and Herman.
7. PAST RIDES AND EVENTS:
1st September breakfast ride Christina’s Van Loveren – Wouter asked if anyone present could chat about this ride
8th September intro to gravel riding- Carl Koch gave us an account of the arrangements, route and the groups on this off-road ride. Working with Andy the two groups did the route at their pace and had a great learning day.
The pre-ride briefing for off road with a few demos by Andy and a discussion on the method of following each other and keeping the group together. He said with all that a small number manged to go off the intended route.
15th September breakfast ride – Wouter asked Tim to chat about the ride with Geoff and he filled in what he knew about the route the 8 people[bikes] and the breakfast at the Pink Lady, most enjoyable.
Wouter mentioned the marshalling at the Cape Town Marathon, successfully run by our club members and how we are becoming the go to people when it comes to organisations needing this service.
22nd September Gents MotoGP day ride at Freedom 301 – Rouen gave the broad strokes and called up Mike Henderson as the ride leader to chat to the club about the event. He mentioned the ride route and the drinks and goodie bags for the gents while watching the MotoGP. Great event but wish more of our members attended.
Wouter thanked Jacqui for all arrangements to this 1st ever event for club gent only.

8. FUTURE RIDES AND EVENTS:
29th September breakfast ride – Rouen [Jakes Noordhoek] called up Donavan who is the appointed trainee ride leader to explain his planed route and breakfast spot. It was mentioned we are also trying the online booking. Members were reminded to use the online booking whenever events are advertised on the website.
29th September training Level 1, 2 and pillion – John explained what they will cover on the training day at Anura and encouraged those that booked to attend to enjoy irrespective of the weather. Promised there will be a lot to learn.
13th October breakfast ride – Wouter mentioned he will lead this ride and to look out for the details on the forum and Facebook page.
27th October breakfast ride – David spoke of a new breakfast ride [ Elgin Valley] Franschhoek Pass and will mix it with a bit of off-road.
7th December Year-end function – Jacqui spoke about the yearend function and mentioned the arrangements made, the menu and venue. Also the club is looking at 2 Honourable life membership awards, Darwin award, Biggest fan award and author of the year. We appeal for nominations and said the criteria will be on the website.

9. Feedback
GS trophy results Western Cape competitors – Wouter called BJ to give us an account of the GS trophy. He let us know about the condition, the competitors, the task that had to be done and the results.
A most enjoyable summary and where to next with training, and the bike to be used in the international competition in New Zeeland Feb 2020.

10. General: David read through the proposed changes to the club constitution and explained we as a club need to vote by a show of hands. 41 out of 42 members voted in favour of adapting the change which is now recorded in the constitution.

11. Guest speaker – John Carr spoke to the members about the new bikes, where he though the technology is going how far ahead of the competition the BMW developers are as seen at recent international bike exhibition/reviews.