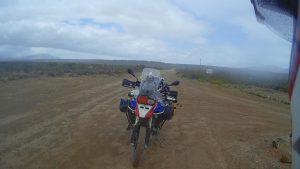 Chatting to Baron we decided it was time for another camping trip. Having watched the visit to Gatsrivier in the Tankwa on ‘Look what you’re Missing’ our destination was set.
After meeting at the usual N1 One Stop, 5 of us set off. Our route took us over the Franschhoek pass to Villiersdorp where the 6th member joined us. With the weather looking a bit ominous with a promise of clearing later we donned rain gear and set off along a mixture of gravel and tar for Robertson. From there it was Route 66 to Montague for a fuel stop and to say good bye to Sonja who was only able to do the Saturday ride.
That was a wise decision on her part because once we hit the dirt/mud from Montague the fun started. Once on the dirt we realised that although not raining at the time the area had had some rain the night before so the going was a bit slippery in parts especially going up Ouberg Pass. A few kilometres after the pass we took a left on the dirt road to Touwsriver which would be our lunch time stop.
It was from here that the road surface changed and it started to rain lightly. About 10 km in with me in the lead I could see the road surface change on the far side of a dip, the pile of gravel stones on the side on the road was a clear indication some road works to stabilise the surface were on the cards. Never the less it was, Lookup, stand-up and open up and I continued. After exiting the dip, I soon realised that the surface had turned to a thick ‘Snot’ and soon it was like riding on Ice. With about 5 meters to go my front wheel which was so caked with mud slipped out and down I went. Fortunately, being mud it was a case of sliding out while watching my bike do a full 180 while one of the side panniers detached from the bike and went off in its own direction.
Once on my feet I saw that Peter had also gone down about 20 meters behind me. Warning the others, I was able to watch Stephan and Ernst make it through while Baron did a spectacular off in front of the camera. Once we had made sure that all were OK the bikes were lifted and assisted to the end on the mud. Once the joking about 3 Beamers going down and the KTM and Triumph getting through were over, my pannier secured with ratchet straps the journey continued. The last 45km to Touwsriver were in the rain and apart from Peter having another 2 off’s we arrived at Steers to enjoy a well-deserved lunch.
By the time we finished lunch the rain was gone as promised and the sun was shining. 3 km outside Touwsriver we were on a dry dirt again. The road to Gatsriver took us through Pienaarspoort, past the Wind farm and over Muishondsberg Pass. Arriving at the camp site we were greeted by our hosts Pieter and Marlize. Fire wood and Braai tools had been provided, while the Lappa had a stocked honesty bar, ice in the freezer and a field kitchen at our disposal.
With the Braai fire going and cold beers flowing a great evening was spent chatting and sharing motorcycle stories well into the night. After admiring the night sky and mass of stars 5 tired guys made their way to their tents for a well-deserved sleep.
Next morning it was clear that Brandon has hurt his ankle when he came off in the mud. With that in mind the route home would be the Patatsriver route to Ceres. So, it was after a leisurely breakfast we bid farewell to Pieter and Marlize and headed over the Muishondsberg Pass again and on to Ceres. Once in Ceres we said our Goodbyes and headed off in different routes home.
Gatsriver is a great place with different accommodation options. It is totally off the grid with no electricity, cell phone reception or internet which makes it the perfect Getaway. Once again thanks to our hosts for a memorable weekend, they even contacted me to make sure we all got home safely.

https://youtu.be/6Vj45lZINJI (Link to U-Tube clip of the mud section)