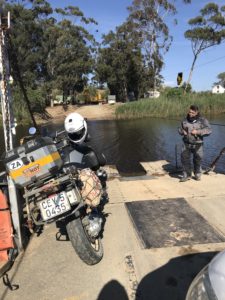 5. NEW BIKES: Jacques
6. TRIP REPORTS: Jacqui announced the quarterly trip report winner Charles Oertel
7. PAST RIDES AND EVENTS:
29th September breakfast ride – Donavan gave his account of a rain drenched ride to Jakes [Noordhoek]
29th September training Level 1, 2 and pillion – John Carr gave update on the new training area open track bigger space for training days at Anura
13th October breakfast ride – Wouter gave his account of the ride to Bistro44 Wellington nice breakfast
19th & 20th October Overnight ride Cederberg Oasis – Geoff spoke about his group’s ride a wonderful distention no incidents going there however coming back 1 of the group had a wipe-out. Thankfully he is unscathed but his bike was a write-off. Some of the group did a further tour with a visitor from Israel and got home very late.
Rouen gave an account of the team work in the easy rider group, the great fun had by all and relatively incident free trip. There will be a trip report on the forum.
27th October breakfast ride – cancelled due to weather … David
27th October training Anura – John Carr see above.

8. FUTURE RIDES AND EVENTS:
8 -10th November … Plaas toe! BMW Motorad Donford S/Bosch – John Carr gave a brief outline of this ride through Riversdale and Stilbaai
10th November Breakfast ride – Ian Verhulp plan a surprise breakfast ride.
10th November Introduction to gravel rides Overberg Greyton – Andy Connell gave a brief appetiser of what to expect on this ride for beginner and anyone who feels a bit rust with off-road riding.
10th November Club Marshals will be active for the Cape Town Triathlon – Andy Connell spoke about this and the following event that the club marshals will be doing. This is a Blue-chip event and the club is a vital cog in the running of theses events.
23rd November Club Marshals will be active at the Double Century Swellendam – Andy Connell
24th November Breakfast ride – Charles Oertel is planning a mystery ride for this occasion.

10. General: Login issues website – Charles described the process and the problem and how to overcome the holdup.
New training area at Anura -John Carr covered this when he spoke to the members.
Andy spoke to the club about his house that burnt down and the wonderful support from the club and members.
He further related some of the processes that he and family have to endure and the support of the community and other organisations that he is active in. Thank Andy for sharing.

11. Guest speaker – a brief chat by Llewellyn about Noon Gun Brewery beer and that was proceeded by a tasting.